Vocal intensity level (vocal IL) is one the key factors in clinical voice sound assessment. With the PHONANIUM script for measuring and showing vocal intensity level in the program Praat, all relevant aspects and statistics regarding (calibrated or uncalibrated) vocal IL can easily be obtained for different voice/speech tasks.

Vocal intensity level (vocal IL) is one the key factors in clinical voice sound assessment. With the PHONANIUM script for measuring and showing vocal intensity level in the program Praat, all relevant aspects and statistics regarding (calibrated or uncalibrated) vocal IL can easily be obtained for different voice/speech tasks.

How to install this plug-in?

First, make sure to have downloaded and installed the program Praat (free available at www.praat.org) on your computer. Than download this plug-in.

Once downloaded, unzip the folder entitled plugin_PHONANIUM_VocalIntensityLevel_v.02.04 and place it in the following directory (i.e., the preferences directory of the program Praat), depending on your computer operating system and the name of the user (for example ‘Emiel’):

What is vocal intensity level?

Although often presumed synonymous, vocal IL is not equal to acoustic power, sound volume or sound pressure. Loudness is another term that is often interchange with IL. However, whereas intensity level is a physically measurable element of sound, loudness is a perceptual attribute that is dominantly but not solely influenced by IL. Other factors are fundamental frequency and spectral properties of the sound signal (Baken & Orlikoff, 2000). In other words, intensity level relates to how sound there relatively is, whereas loudness refers to how much sound we here.

Vocal IL is regulated at different echelons in our speech system. The major factor is subglottal pressure, which controls the vocal intensity level below the vocal folds (Plant & Younger, 2000). The more pressure produced in the lungs, the higher the intensity level of vocal sounds: for every doubling in pressure above phonation threshold pressure there is an increase of 6 dB of vocal sound (Titze, 1994).

Glottal width and velocity of adduction are important factors at the level of the vocal folds. For every extra millimeter of glottal width there is an increase of 3 dB of vocal sound (Titze, 1988; Titze, 1994), and per doubling of speed of vocal fold closing there is an increase of 5-9 dB of vocal sound (Scherer, 2014). The relative duration within the glottal cycle with which the vocal folds are open/closed also influences the vocal IL: more closed quotient (or less open quotient) causes increase in vocal IL (Scherer, 2014), because there is more time to build up subglottal air pressure (Colton et al., 2006). From study in which laryngeal muscle activity was measured during silent, comfortable and loud phonation, level of vocal intensity was mainly associated with activity in the lateral cricoarythenoid muscle, but also with activity in the thyroarythenoid and cricothyroid muscles (Baker et al., 2001).

Above the vocal folds there are also factors that affect the intensity level of the speech signal. Shape and stifness of the supraglottal structures may influence the resonance charateristics of the vocal tract (Titze, 1994), and together with mouth opening this may govern the vocal IL.

However, all these factors do not operate in isolation. For example, glottal width and vibratory amplitude of the vocal folds increase with subglottal pressure. The influence each other to culminate in the final vocal IL.

It is clear that vocal intensity level is related to/controlled by various physiological events in all layers of our peripheral speech system. Vocal IL can thus be considered as one of the most important acoustic features of the speech signal, and should therefore be taken into account of any clinical assessment of voice and speech.

Patients with unilateral vocal fold paralysis, for example, often lack the ability to phonate sufficiently loud. Their vocal folds cannot adduct adequately and lack tonicity and mass. This prevents building up sufficient subglottal pressure and consequently intensity of the phonatory sound (Miller, 2004). The speech of Parkinsonian patients is also typified by reduced vocal loudness (Fox & Ramig, 1997), and one of the main approaches in the treatment of their disordered speech is to focus on increasing vocal intensity level as stipulated in the Lee Silverman Voice Treatment (Ramig et al., 1995). Patients with muscle tension dysphonia and vocally traumatic behaviors, on the other hand, are often found to speak excessively loud (Altman et al., 2005; Van Houtte et al., 2009) because of raised phonatory effort.

As abnormal vocal IL can be pathognomonic in several voie and speech pathologies, it is crucial to objectively measure it in clinical assessment and follow-up of larynx, vocal folds and speech in general. As such, vocal intensity level is one the key elements in documenting an individual’s voice/speech and in tracking outcomes of voice and speech treatment. With this PHONANIUM script for the program Praat, several descriptive statistics (i.e., minimum, maximum, 10th/25th/75th/90th percentile, median, mean, standard deviation, interquartile range, and range between 10th and 90th percentiles) of vocal IL become readily and rapidly available, as well as a graph showing its progression in time and and a graph displaying its absolute distribution. All this information can be collected on whatever speech task the clinician intends to analyze: steadily sustained vowel, spontaneous speech, read text, crescendo and decrescendo phonation, singing, diadochokinetic syllable repetitions, etc. 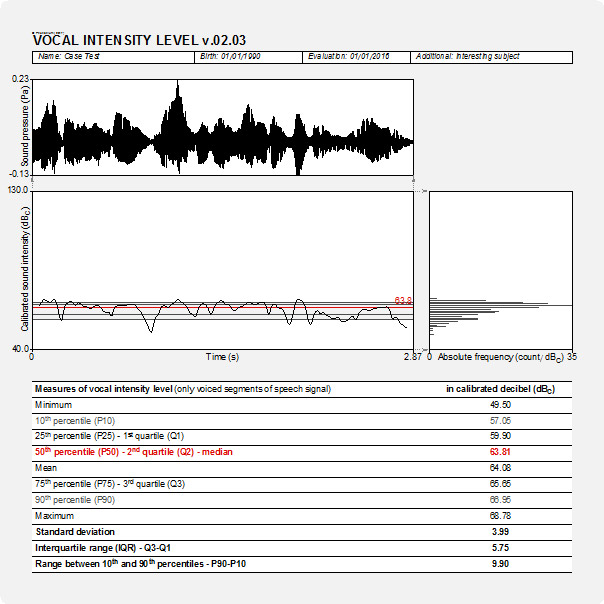 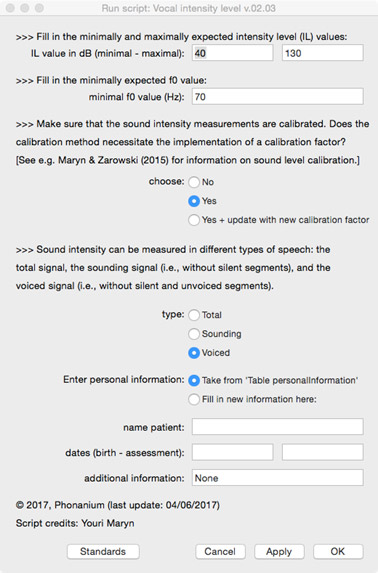 Before analyzing the voice/speech signal, the user is prompted in a form:

For clinical measurements of vocal intensity levels in the vocal range estimation to be reliable, it is essential to be calibrated before recording and analyzing sound signals (Ma, 2011). A straightforward method for calibration of the vocal intensity level has been described and found feasible, valid and accurate by Maryn & Zarowski (2016). This script automatically calibrates your intensity level measures when these data have been implemented/completed.

Many of the acoustic analyses and clinically relevant voice markers in the scripts of PHONANIUM imply sophisticated and complex procedures. However, when they are run on signals with bad recording quality, they loose their clinical value in terms of validity and reliability. So, prior to undertaking high-standard acoustic voice analyses, clinicians have to make well-considered choices in all of the following elements in the audio recording chain: room acoustics and ambient noise, type and placement of microphone, microphone preamplifier, and digital audio capturing device. To sample all relevant vocalizations and speech tokens as least polluted by recording-related noise as possible is what it essentially comes down to. For example Maryn (2017) offers an overview on how to deal with this.

Click here to visit PHONANIUM’s page on how to minimize recording-related influences on voice/speech signals.

Important: use the ‘Personal information’ script

With the script ‘Personal information v.01.02’ the user can complete an electronic form with the subject’s/patient’s name, date of birth, date of assessment, and optionally extra information. All this information (a) is than written into a table, (b) will be consulted by the other PHONANIUM scripts if the option “Take from ‘Table personalInformation’” is selected, and (c) will be written automatically in the output of these scripts. This increases the user-friendliness of working with PHONANIUM scripts in the program Praat, as the user/clinician has to complete this personal information only once during the entire voice assessment session.

For customers in the EU: this software currently has no CE certification. We are in the process of application. In the meantime, this software can be used for scientific as well as educational/learning purposes.

Click here to visit the website where the program Praat (Paul Boersma & David Weenink, Institute for Phonetic Sciences, University of Amsterdam, The Netherlands) can be downloaded. This software runs under the GNU General Public License. Click here to download this license.

There are no reviews yet.